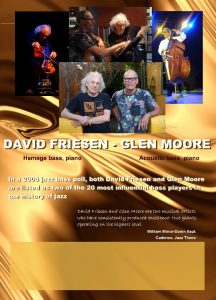 In a 2006 jazz bass poll, both David Friesen and Glen Moore were listed as two of the 20 most influential bass players in the history of jazz.
Friesen and Moore have both passed (years ago)the half-century mark, and the maturity this affords shows itself in all the best ways. All the youthful fascination with and boundless energy for their music is augmented by perspectives gained through decades of experience.
– Patrick Hinely/Jazz Times

Whether operating on the same instrumental plane, playing piano against bass, or standing alone in the company of one another, David Friesen and Glen Moore manage to come off like the perfect pair. Both their differences and similarities tie them together.
– DAN BILAWSKY/All-ABOUT-JAZZ

Bassists/pianists David Friesen and Glen Moore take their rightful place among the great jazz duos: the CD Bactrian fully supporting David’s belief that “this new recording represents something very special … not only representing some of what we both feel is the very best recorded music we have played together … but something else inside the notes that only happens when you must endure the wait of over 50 years.”

Glen Moore and David Friesen are two musical artists who have consistently produced excellence: true giants operating on the highest level. Year after year (and for fifty years now) they have raised the bar of expectation and fulfillment, until it would appear that they can ascend no higher—yet I will not be at all surprised when, possessing the seemingly infinite talent they have (the extent of their rare gifts, their compatibility and natural consonance) they do so: offering future work we shall all be privileged to hear. Thank you, David Friesen and Glen Moore!
– William Minor-Down Beat, Cadence, Jazz Times

David Friesen is included in a recent poll as one of the 100 Greatest Jazz Bassists of all time. In 1997 he was nominated for the best jazz bassist in the American Jazz Awards ceremony in Los Angeles.
Friesen was inducted into the Oregon Music Hall of Fame at the first induction ceremony Sept. 2007 and the Oregon Jazz Society Hall of Fame May 2012.
Friesen has written two musical scores for animated shorts, both of which have been Academy Award Nominees
David Friesen’s original composition Playground placed 2nd in the 2014 International Songwriting Competition with over 18,000 applicants.

„Bassist David Friesen is a phenomenon, a player whose musicianship, tone, time and imagination are uncategorizable.“
– Nat Hentoff
Glen Moore

„Glen Moore is one of the most virtuoso bassists in jazz, a great musician open to influences from around the world.“
– Ken Dryden

Glen Moore is a jazz bassist with early classical training in piano until age 13. He played bass in the school orchestra, experimenting with jazz and free improvisation on his own. His performing career began at age 14 with the Young Oregonians in Portland, Oregon where he met and played with American Indian saxophonist, Jim Pepper. He graduated with a degree in History and Literature from the University of Oregon where he also studied the cello. His formal bass instruction started after college with Jerome Magil in Portland, James Harnett in Seattle, Gary Karr in New York, Plough Christenson in Copenhagen, Ludwig Streicher in Vienna and Francois Rabbath in Hawaii. For the past 30 years, Glen has played a Klotz bass fiddle crafted in the Tyrol circa 1715 on which he has made extensive use of a unique tuning with both a low and high C string.

Moore co-founded the group Oregon in 1970 with Ralph Towner, Paul McCandless and Collin Walcott. In 1999, he completed work on the group’s 23rd album called, Oregon In Moscow, which features his bass playing and compositions with the Moscow Tchaikovsky Symphony Orchestra. He has toured Eastern and Western Europe, Northern Africa, India, Pakistan, Sri Lanka, Australia and throughout the United States in major clubs, concert halls and festivals with that band.

His selected recordings include: Bass Is with David Holland, Jamie Faunt and Peter Warren on Enja; two duet albums with David Friesen, one on Vanguard and the other on Burnside; albums with Nick Brignola, Jeremy Steig, Paul Bley, Annette Peacock; Introducing Glen Moore with David Darling, Zbigniew Seiffert and Jan Hammer on Elektra; Dragonetti’s Dream for unaccompanied bass on Intuition; three MOKAVE albums with Larry Karush and Glen Valez on Audioquest; three albums with Nancy King as KING & MOORE on Justice; five recordings with Rabih Abou-Khalil and numerous albums with OREGON. His most recent solo CDs are called Nude Bass Ascending featuring Steve Swallow, Carla Bley, Rabih Abou-Khalil and Arto Tuncboyaciyan on the Intuition label and King on the Road featuring Nancy King and Rob Scheps on the Cardas Audio label. Currently he is at work on an album of his piano songs for Intuition.